Life in the extremes: Coping with a parent who has BPD

Life in the extremes: Coping with a    parent who has BPD

As a child, Prem adored his father,Raj and confided in him often. Once, he confessed to his father that he stole a pen from school and was now feeling guilty about it. To this, Raj slapped and scolded him harshly.  Prem’s mother Hema placated him but she was unsure of what was going on. She knew that Raj had never hit his son, not even as a child. Prem would have to bear the brunt of his father’s mercurial nature and would get beaten and yelled at for every small thing. Along with that, his father would command his attention all the time, would want him to spend most of his time with  him and would blame Prem and his Hema if anything every went wrong in their lives. Prem convinced his mother to take his father to a psychiatrist. There it was found that Raj was suffering from BPD.

Refer to my previous articles for more information on Borderline Personality Disorder. Here we shall talk about the challenges of growing up with a parent who might have BPD.  Since one of the key features of BPD is disturbed interpersonal relationships, it is a given that their disorder would affect all those in the family. Specially perplexed are the children of such individuals who are clueless how to deal with their parent.

There are several factors which lead to BPD — social, cultural, genetic, and environmental. As a youngster, Raj’sworking parents weren’t there for him emotionally when he needed them the most. He was sexually assaulted once by his P.T. teacher. This troubled childhood and yearning for belongingness manifested into BPD over the years. 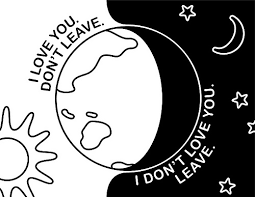 The greatest fear of an individual with BPD is perceived rejection, and the fear of being abandoned. So, they will do just about anything to feel they are loved at all times. Sadly, in this personal pursuit, they have difficulty in seeing their child as separate. If the child has interests other than the parents’ , then the parent with BPD will react unpredictably and often harshly.

Here are some problems a child faces with his parent who is suffering from BPD:

It was found that Raj was extremely afraid of being left alone, had issues with his self-image, was prone to reckless behavior, and on the inside felt chronic emptiness and boredom. The trigger point, according to the psychiatrist, was the confession which Prem made to Raj. Prem’s admission of stealing was not consistent to the high self-image Raj had for himself which is why he burst out so violently and unpredictably. And understandably,Raj didn’t feel guilty for hitting his son.

To accept that Raj had a mental disorder was tough. When he realized that BPD led him to mistreating his son, he even tried to abuse himself,but he was rescued by his wife who handled the situation with utmost care. Hema was also worried that Prem may not digest it all and may suffer from a similar mental disorder.

It took time, but normalcy was considerably restored. Taking the first step to seek help was the most important decision Hema made.

For children, coping with the problems faced can be difficult. Once diagnosed, it is recommended that the child is taught to maintain boundaries from the parent with BPD.

The child must be allowed to vent his fears and concerns towards his parent in a therapy session, which gives way to understanding himself and his parent with BPD

Since Raj was diagnosed sooner, Prem did not have to face any scarring trauma from his father.

Growing up with one or more parents affected with BPD causes significant damage to the child’s sense of self. Relief can only be achieved by stopping the abuse. This is done by installing consistent boundaries that do not allow for this type of abuse.

The nub of the problem is that if you have been raised by a parent with BPD, these behavioral scenes are your normal. First you need to step outside the abusive relationship sufficiently to realize what’s been done to you. After all, children don’t ask for abuse from the people they love the most in this world.

Psychotherapy can help with objectifying what’s going on, setting good limits, and being the best son or daughter that you choose to be under the circumstances.